Trying to bring back the only spinoff of their franchise that had any success.

The momager is pushing for an offspring to commit to a fake relationship with her ex just to bring back the only spinoff of their franchise that had any success.

Keeping Up With the Kardashians 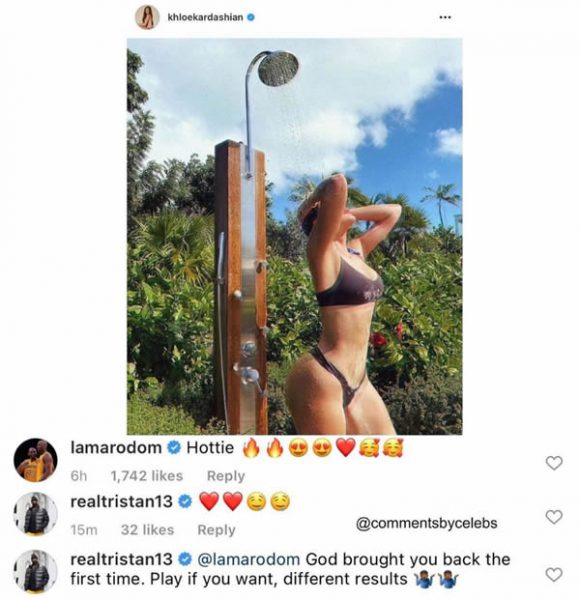 Helen of Troy can have her thousand ships, because with a single bikini photo Khloé Kardashian has launched a major feud between her exes Tristan Thompson and Lamar Odom.

The two basketball stars walked directly into the reality TV fixture’s thirst trap earlier this week after she took a break from posting cryptic Instagram quotes to share a pic of her showering in a tropical locale.

The comments hyping up Kardashian came pouring in with both Thompson and Odom openly thirsting over their one-time partner.

“Hottie,” Odom wrote in the comments alongside a string of fire and heart-eye emoji, while Thompson followed suit with a few drool emoji of his own.

Both of their responses raised some eyebrows, given that Kardashian and Thompson split for the umpteenth time in June amid a new round of cheating allegations. Odom and the Good American founder, meanwhile, tied the knot in 2009 after a month of dating. The two called it quits in 2013, but their divorce wasn’t finalized until three years later.

Despite having absolutely no ground to stand on, Thompson lashed out at Odom after he caught wind of the latter’s flirty comment.

In 2015, he was hospitalized after being found unconscious in a Nevada brothel and suffering “12 strokes and six heart attacks” while in a coma following the incident. Kardashian rushed to his side and helped him recover, though the two were broken up at the time. – Source