She thinks she knows better and fired the writer of the singer’s biopic. 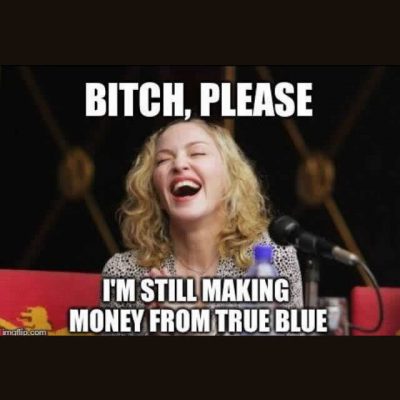 Yeah sure, lets dump the Oscar winning writer who also has won awards for television shows and Broadway.

The one named permanent A+ list singer who is one of the world’s worst actresses and who makes awful awful decisions when it comes to anything on a screen, thinks she knows better and fired the writer of the singer’s biopic.

Madonna will direct and co-write a biopic about her own life and career.

Diablo Cody (Juno) is also penning the script, and Amy Pascal (Little Women) is producing, along with the music legend herself.

“It’s essential to share the roller coaster ride of my life with my voice and vision,” Madonna said of the film. – Source

Madonna has suggested her ‘Madame X’ documentary could end up on OnlyFans.

The 62-year-old singer was believed to have signed a deal with Netflix to broadcast the film which will feature extensive footage from her 75-date 2019/2020 run.

It will also include behind-the-scenes clips of Madonna in action, and is set to detail the battles she had with hip and knee injuries, which forced her to cancel several of her tour dates.

However, the ‘Like a Virgin’ hitmaker has suggested it might be too X-rated for some platforms and admitted she would be thrilled if it did end up on the adult site.

She told fans on Instagram: “You should definitely have had that woman get her t*** out in ‘Like A Prayer’.

“OnlyFans – do they have a format to show a whole show? All right, well that’s something to think about.

“It could make people feel a little bit uncomfortable because art is art, here to disturb the peace.”

Last month, a source claimed: “Madonna quite literally put blood, sweat and tears into the ‘Madame X’ tour and she wants this documentary to show it off for the spectacle that it was. – Source