This outspoken former A- list actress who has at least one hit show to her credit, is back using drugs in a really big way and needs rehab.

Hollywood star-turned-woke liberal activist Alyssa Milano has written a new book about her life called “Sorry Not Sorry,” and in it, she wrote about her feud with her former “Charmed” costar Rose McGowan. Unfortunately for Milano, however, McGowan did not take this well, and she minced no words as she fired back on Twitter.

The actresses, both of whom have a flare for the dramatic, starred as half-sisters Paige and Phoebe on the popular WB television series “Charmed” from 2001 to 2006. There is no love lost, however, between these on-screen sister witches as they’ve exchanged insults over the years.

McGowan has repeatedly called out leftist Milano for hypocrisy and accused her of creating a “toxic” environment on the set of the popular drama.

Now, it looks like Milano went on the offense with what appears to be a veiled jab at McGowan in her new book.

In an excerpt from her book, Milano seemingly referred to McGowan when she wrote, “There was once a rose in my life that I loved particularly strongly… Roses used to be my favorite flower, but I no longer grow them. I’ve been pricked too many times.”

When user @Charmed_Reunion tweeted the excerpt reportedly referring to McGowan, she fired back. 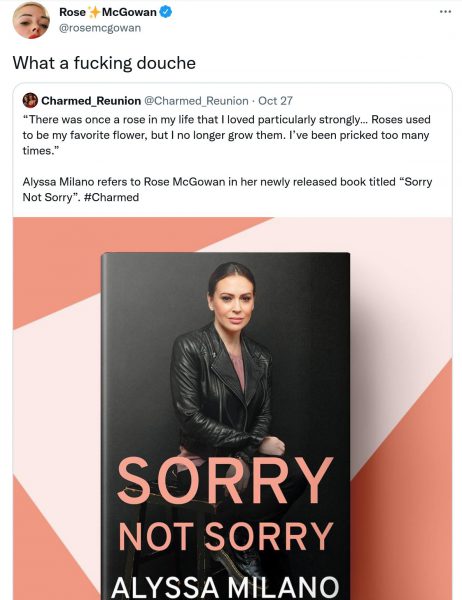