One can never know the true earnings.

He likes being single with no obligations

The cleaning product actor talks a good game but it is just talk. He likes being single with no obligations and wants to share more custody to save on that child support bill. 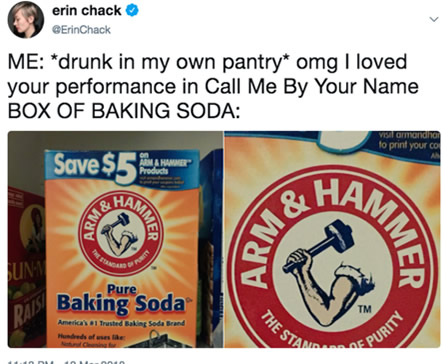 The cleaning product actor talks a good game but it is just talk.

He likes being single with no obligations and wants to share more custody to save on that child support bill.

Armie Hammer is filing for joint custody of his two children whom he shares with his estranged wife Elizabeth Chambers.

The Call Me By Your Name star is requesting Chambers, 38, return to the U.S. to arrange a custody schedule for their daughter Harper Grace, 5, and son Ford Douglas Armand, 3.

Chambers is currently staying in the Cayman Islands with their kids where she and Hammer quarantined at the start of the coronavirus pandemic. Hammer, 34, returned to Los Angeles after the two announced their separation in July.

“As the coronavirus pandemic worsened in the United States, Elizabeth and Armie elected to stay with their children temporarily in the Cayman Islands where the pandemic appeared to be under greater control,” the actor’s lawyers state in legal documents according to The Blast. “Armie returned to Los Angeles this past July, with a promise from Elizabeth that she and the children would follow shortly thereafter. To date, however, Elizabeth and the children remain in the Cayman Islands and Armie has not seen the children in several months now.” – Source

His partner killed the dog and then served it as meat

His wife must remain chaste

He still has that escape from the country plan all put together.

She is being paid ten times her normal rate

It sounds like she wants to push her co-host permanently out the door.

Was the time traveler also using his name as a clue to the future and the pandemic?

These veterans played husband and wife on a very popular family TV show but..

Second time she has been screwed over by an actor in the past month.

He has never watched video of the politician and only heard him speak one time.