She was found dead in her bed this past week

This former actress who gave up the business was found dead in her bed this past week. It is always the people who set up the GoFundMe within 24 hours who should be looked at as the prime suspect.

This former actress who gave up the business was found dead in her bed this past week.

It is always the people who set up the GoFundMe within 24 hours who should be looked at as the prime suspect. 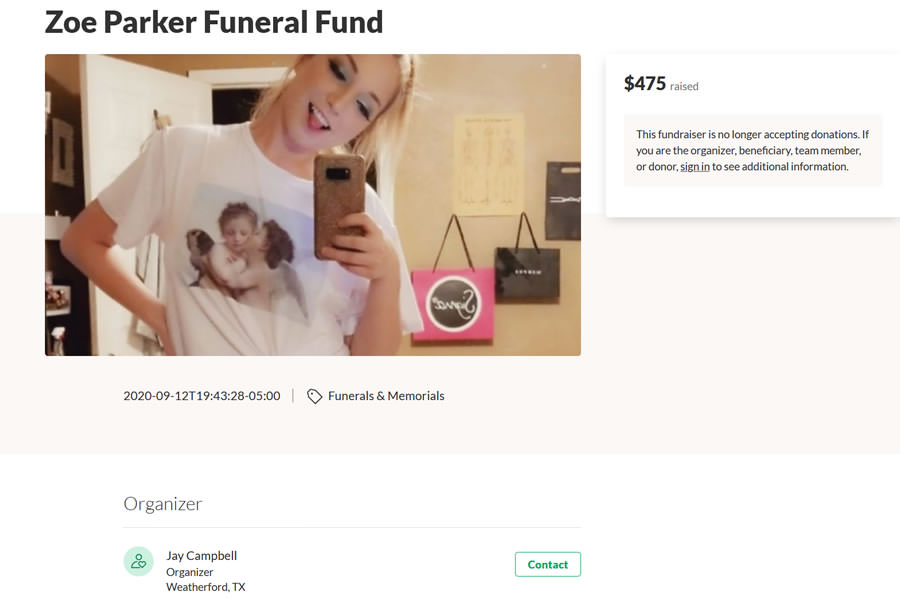 Ex-por.n star Zoe Parker ‘dies in her sleep’ at the age of 24 just months after leaving the industry to start a new life and be near her family

Former adult film actress Zoe Parker has died in her sleep at the age of 24, her fiance has announced.

Her death came just months after she quit the por.n industry, and she had recently got engaged and moved back to her native Texas to start a new life.

A cause of death has not yet been announced.

‘We are sad to report that Zoe Parker passed away in her sleep on September 12th at around 2 am,’ fiancé Jay Campbell wrote on a GoFundMe page set up to cover funeral expenses.

As of early Monday afternoon, the GoFundMe campaign was not taking donations.

Campbell wrote: ‘After leaving the adult industry, Zoe Parker moved back home to Texas to be near her family to start a new life.

‘She had started doing great and recently announced her engagement and by all accounts seemed truly happy for the first time in her life.’

Family and friends were stunned at her sudden death, with one insider telling industry news blog MikeSouth.com: ‘I spoke to Zoe Parker just last night. I still can’t even believe she’s gone.

‘It doesn’t even seem possible. She was so happy with her new life back in Texas.

‘As you can imagine, her fiancé is utterly devastated. Zoe loved him so much.’ – Source

She will have further reason to be disliked.

He just can’t help himself.

She likes everyone to think the jokes are her own.

He is doing it again, but this one has talked about her mental health issues in the past

She knew he was cheating while pregnant.

He let it slip to a friend that the house is just a rental and not owned.

She was interviewed again on Monday by the FBI.

They wanted to make sure they got it exactly right.

About the hit in NYC.

He was forced to sign multiple documents telling him to keep his mouth quiet.