She insists his other relationship isn’t real

This former A list tween star turned A- list adult singer isn’t even trying to be discreet about sleeping with the late night actor multiple times over the past several weeks in several different cities.

She insists his other relationship isn’t real because she wouldn’t be hooking up with him if the relationship was real. 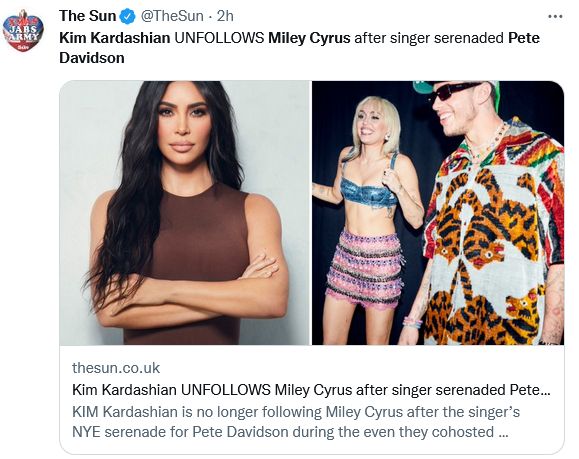 ‘Keeping Up With The Kardashians’ Spoilers reveal that fans noticed Kim Kardashian Has unfollowed Miley Cyrus on Instagram, and some of them think she did it because of her boyfriend, Pete Davidson. The singer recently hosted a New Year’s Eve celebration in Miami with the SNL star. Fans know that Miley recently poked fun at Pete for dating Kim.

Last month, Miley Cyrus and Pete Davidson were guests on The Tonight Show Starring Jimmy Fallon and opened up about their friendship. They shared that they bonded when Miley hosted Saturday Night Live in 2017. They even got a matching tattoo that is themed around one of their SNL skits.

Elsewhere during the duo’s Tonight Show appearance, Miley poked fun at Pete’s relationship with Kim Kardashian by singing a cover of the Yvonne Fair song “It Should Have Been Me.” Miley started the performance by dedicating the song to her co-host. “Pete Davidson, this song is for you,” she said.

“When I saw those photos, this is what I played.” “You know, Pete, How could you do this to me on the week of promoting our special?” she also said during the show.