Old Hollywood: He took the award, smiled and then walked off the stage. 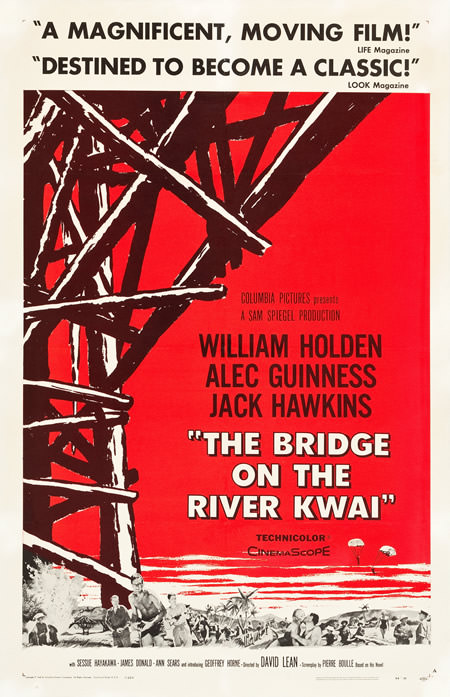 Many decades ago, during the time of blacklisting, there was a writer who won an Academy Award for writing for this classic war time film.

The writer went on stage to collect the award, but didn’t say a word.

He took the award, smiled and then walked off the stage. Why no speech or a thank you?

Because the writer who accepted the award couldn’t speak English, let alone write English, so how on earth did he manage to write a two hour long movie that is completely in English?

He pretended he was the writer covering for the two blacklisted writers who actually wrote the script.

Movie: The Bridge over the River Kwai

An epilogue will be written this week to the blacklist that Hollywood directed against Communists, suspected Communists and their supporters in the movie community almost three decades ago. On Saturday, in a public ceremony in the theater of the Academy of Motion Picture Arts and Sciences, the widows of the screenwriters Carl Foreman and Michael Wilson will be given the Oscars withheld from their husbands 27 years ago for the screenplay of ”The Bridge on the River Kwai.”

”The Bridge on the River Kwai” won seven Oscars in March 1958, including best picture of 1957. The man credited with the screenplay was Pierre Boulle, who had written the novel ”The Bridge Over the River Kwai.” Mr. Boulle, a Frenchman who could neither read nor write English, was not at the 1958 Oscar ceremony.

Mr. Foreman and Mr. Wilson – who had actually written the award- winning screenplay – were not at the ceremony, either. They were living in Europe. In 1951, they each had appeared before the House Un-American Activities Committee (HUAC) and had cited the Fifth Amendment. Like dozens of other young actors and screenwriters, both men had been members of the Communist Party. Between 1947 and 1957 several hundred actors, writers and directors had been put on a blacklist circulated by Hollywood studios in response to pressure from Congress during the height of the cold war.

According to his widow, Mr. Wilson, who had been a Marine officer in the South Pacific during World War II, wrote a statement, which HUAC did not allow him to read, that he was opposed to the Korean War and that his political views were his own private opinion.

Mr. Foreman was willing to admit that he had been a Communist and, disillusioned, had dropped out of the Communist Party in 1942. HUAC, however, demanded that he name other Communists. ”The day Carl testified, I drove him to the station,” says his friend John Weaver. ”He said they offered a deal. They’d hand him a list of names of people who had been named over and over and he could pick five or six and that way he couldn’t do those people any harm. Carl said he answered, ‘No, but I destroy myself.’ ” – Source