Add a creepy father to the list of the things this barely there celebrity has to work through in her sobriety.

The actor father doesn’t even take photos like that with his wife.

Too close for comfort?

Fans are disgusted with “The Real Housewives of Beverly Hills” star Lisa Rinna’s husband, Harry Hamlin, over a “creepy” and “provocative” photo he took with their older daughter, Delilah Hamlin.

Though the picture in question was snapped last month at New York Fashion Week, it recently made its way to Instagram, where users expressed their many concerns.

The image shows the actor, 70, standing closely next to the model, 24, while grabbing her tightly by the lower waist.

In a sheer top, Delilah is seen staring seductively at the camera while her father intensely presses his face against the side of hers. – Source 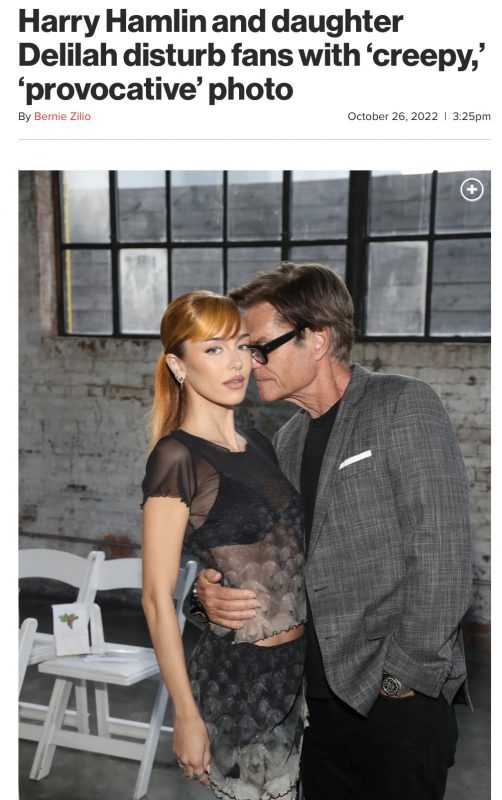 Last year I wrote about the evidence suggesting Hamlin may be secretly gay. That is one theory. What we do know is this scandal has to be bigger than a mere man/woman affair. I mean the way Rinna was flipping out suggests the news would destroy Harry’s career and a hum drum straight affair is not enough to ruin anyone’s career or even really hurt their career.

So whatever it is, it’s big. Now someone made a comment about an alleged affair that Hamlin had with actress Julianne Phillips on the set of Allie & Me in the 90’s on the gay conspiracy post.Here is the intriguing comment,

“Harry was two-timing Rinna with Julianne Phillips when they worked on Allie & Me. Phillips broke it off when she found out about Rinna, but Harry was not having it – he wanted more. Rumor is he attacked Phillips, Rinna threatened Phillips and Phillips left town and never worked in the biz again.

Everyone knew about this in 1997 but is has been major league hushed up. Someone ask Rinna if she has seen Julianne Phillips lately. Rinna will blow a gasket.

They’ve been keeping their distance since Richards left the show, of course — occasionally coming together during reunions to address their bad blood. But in an exclusive sneak peek at Tuesday’s all-new episode, the two find themselves face to face at game night. And let’s just say, it does not go well.”

So this suggests that the scandal has to do with an assault of some sort potentially rape which would be a big career-killer. This is another plausible theory.

But I know, it’s just a comment. On it’s own that’s all it is, but lets look at some other clues.

Check out this nugget from a “blind item” on CDAN that some folks on Twitter sent me in regards to the Harry Hamlin scandal. It describes a situation…

“Back in the day before the internet, this actress was front page tabloid material for a good two years. She wasn’t really even acting all that much when she was tabloid material. She was primarily a model, although, I think it is fair to say that some of the time she was being paid for more than just modeling.”

So imagine that the actress is Julianne Phillips. The insider goes on…

“Anyway she hooked up with a permanent A+ list singer and it was cover story stuff.”

Julianne was married to Bruce Springsteen — so that fits.

“The breakup was even more cover story stuff. When they did break up, she actually started getting solid acting roles and even was a main character on a long running network hit.”

If Julianne, that would be Allie & Me.

“When it ended her career did too.” Check.

“Kind of. Coming off a hit like that, she had tons of offers. One of the offers she chose to accept was on a movie. Nothing big budget, but a nice role and a good paycheck. It would be the end of her career.”

If her that would be Tidal Wave: No Escape (1997). She starred with Corbin Bernsen, Hamlin’s costar on LA Law.

“On the set was this former A list actor who was trying to make a comeback. It took him awhile to make that comeback and he still is not at the level he was back in the day even though just as many people know his name.”

(I’m not sure if the insider means the set of the film or the set of Allie & Me. Hamlin did star on an episode of the show in 1997…the year he married Lisa Rinna.)

“Anyway, the two got involved on the set. Unbeknownst to our actress, the actor was involved with someone he eventually would marry. When our actress found out she broke off the on set hookup, but our actor decided he was going to have sex with her one more time.

Our actress has never recovered and never worked again.” – Source 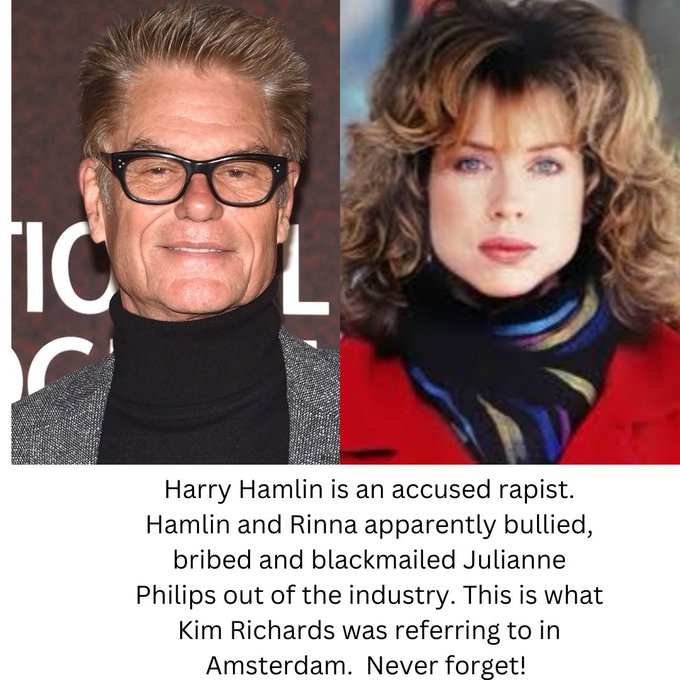 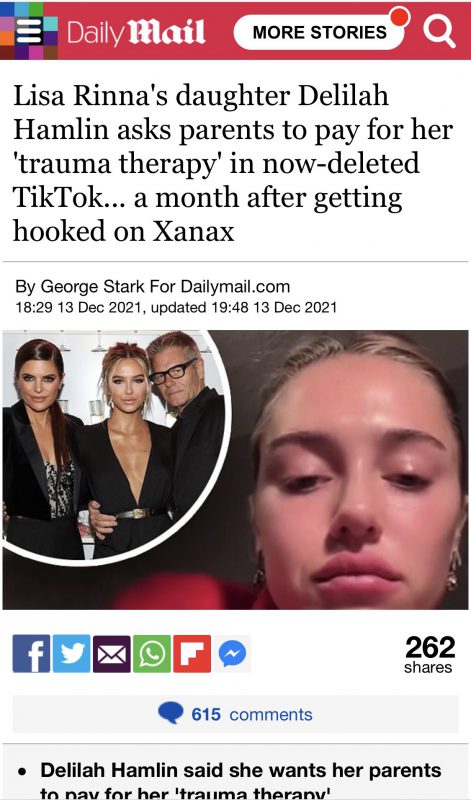