Where Is The Kid? – Old Hollywood

In the past in this space, there have been several stories about old Hollywood actors and actresses who gave up kids for adoption or pretended a family member was a child’s parent instead of themselves.

Old Hollywood allowed for that kind of anonymity and hiding family members and histories that might make a fan hesitant to buy a movie ticket. Much like me personally wanting to ask Katie Holmes about the two weeks she went missing at the beginning of her relationship with Tom Cruise, this blind item asks the question why did this actress disappear and go off to a place she knew she wouldn’t be bothered.

At the time, the actress was A list and living with the alliterate rich guy who made movies and airplanes.

The reason she gave for leaving and going back home was because he was sleeping with multiple men and women.

She couldn’t understand why he would do that, especially since she was pregnant with his child.

Our actress didn’t have an abortion because she kept hoping that the alliterate one would change his mind and have her come back and be loyal and be monogamous.

It never happened, so she had the baby and presumably gave the baby up for adoption.

He knew and she knew.

The adoptive parents of the child never knew either. 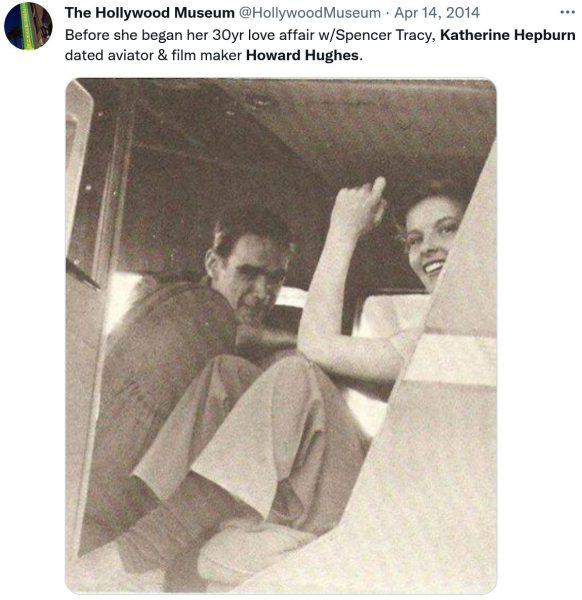 On 11th June 1936 Hughes was driving on Wilshire Boulevard when he struck and killed a pedestrian named Gabriel Meyer. Hughes was arrested and charged with manslaughter. Despite the fact that pedestrians had right-of-way in Los Angeles and that he had broken the law through reckless driving, Hughes was released without charge. In his book, Howard Hughes: The Secret Life (2004), Charles Higham argues: “In those days, the District Attorney could be bought and sold, and anyone with sufficient money could get away with almost anything.”

In 1938 Hughes began living with Katharine Hepburn although he continued to sleep with Cary Grant, Fay Wray, Ginger Rogers and Olivia de Havilland. Later that year Hepburn discovered what was happening she left him and moved back to her home in Connecticut. In her autobiography, Me: Stories of My Life, she pointed out that her “love for him had turned to water.” – Source