The producers got everyone on camera to feign innocence t

The whole second season of this show was just to set a narrative for down the road when there is a trial for this child p.o.r.n. procurer.

The producers got everyone on camera to feign innocence that the other cast didn’t know anything. 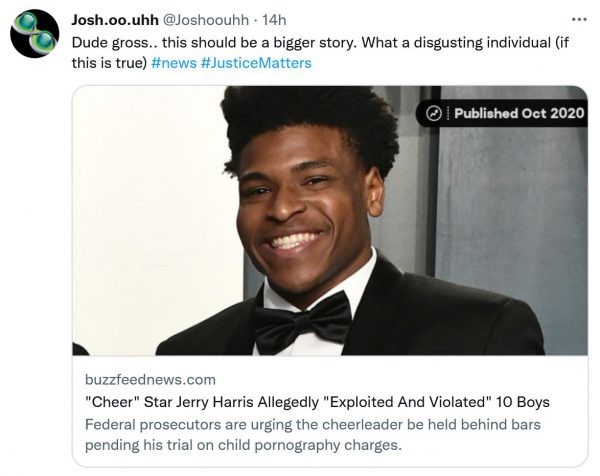 “Cheer” star Jerry Harris — who is awaiting trial for child pornography charges — is oblivious to the seriousness of his situation, one of his co-stars says in a new episode of the reality show.

Harris, 22, is facing as much as 30 years in prison, but is allegedly telling acquaintances that he is planning to become a motivational speaker, as if he doesn’t have a care in the world.

“He wrote me a letter and it was hard to read,” cheer coach Monica Aldama says in Season 2 of the Netflix show, which premieres on Jan. 12.

“His letter was so optimistic. Like there was not one negative thing in this letter. He said that he hopes to one day be a motivational speaker.”

Aldama — who was “caught off guard” by the tone of the letter and has not responded — confessed to feeling torn about Harris, who she loved “like my own child.”

“I want to be supportive,” Almada explained, “Yet I’m so disappointed…I have all these emotions that are just fighting each other.” – Source