Old Hollywood – Kindness: Some of the organizations he gave to were smart and held onto it and made even more money

This deceased foreign actor is associated with a particular genre of film.

He often starred with another actor who was taller than him and they became good friends off camera.

He was also in one of the biggest films of all time that spawned prequels, sequels, and spin offs.

Off camera, he was a very kind man who did a lot for charity including recording readings of audiobooks and often appearing at charitable events. One of the biggest things he did to raise money for charity (care of senior citizens was his main cause) was to leave not only all of his money to his favorite charities when he died but much more profitable all of the various memorabilia he had saved from that famous movie, a lot of which was signed.

Some of the organizations he gave to were smart and held onto it and made even more money for those under their care. 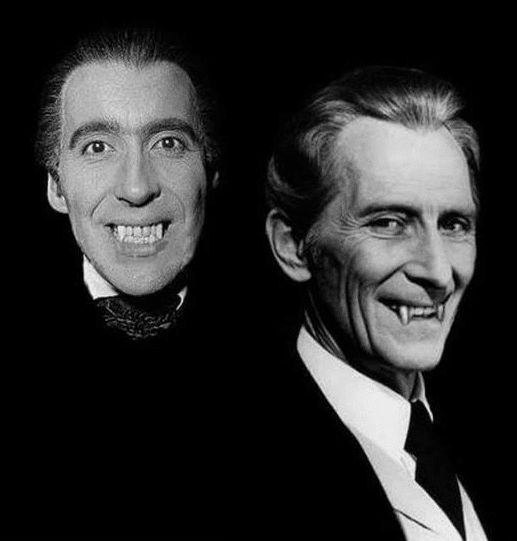 “The Gentlest and Most Generous of Men”: The Friendship of Peter Cushing and Christopher Lee

In his autobiography, Christopher Lee recounts their first meeting, which took place on the set of The Curse of Frankenstein. “Our very first encounter began with me storming into his dressing-room and announcing in petulant tones, ‘I haven’t got any lines!’ He looked up, his mouth twitched, and he said drily, ‘You’re lucky. I’ve read the script.’ It was a typical wry comment. I soon found Peter was the great perfectionist, who learned not only his own lines but everybody else’s as well, but withal had a gentle humour which made it quite impossible for anybody to be pompous in his company.” Their friendship was born. It is ironic that, as their friendship grew, they tended to play on-screen adversaries, most notably of all Van Helsing and Dracula; the end sequence of Horror of Dracula (1958) is for me the ultimate Dracula scene committed to celluloid. Cushing himself reflected upon his role as Van Helsing: “To me, Van Helsing is the essence of good pitted against the essence of evil…I believe that the Dracula films have the same appeal as the old morality plays, with the struggle of good over evil, and good always triumphing in the end.” As Van Helsing looks peaceably through the day-lit, stained-glass windows after dispatching Dracula in what must have been a very physically tough scene to play, you can see what Cushing means when he said, “I suppose in a way it is possible that I was pre-ordained to play Van Helsing. For although I am not a religious man, I do try to live by Christian ethics and I believe in the truth as set forth in the New Testament. I can see so many of the elements of good and evil in life, and this seemed to give me added strength in my screen battles with the powers of darkness.”

However, the loss of Cushing’s beloved wife Helen in 1971 was to cast a pall of sadness over the remnant twenty years of his life; although he continued to work and always performed to the best of his abilities, his heart was never again in his work in the same way, and his friends, Lee included, understood this. It is a matter of great sadness though that what is probably his best-known mainstream role – in Star Wars – was to occur in those years after his greatest enjoyment in his career had passed. Lee was also to work his way into the mainstream, and now in his ninety-first year continues to work at a frenetic pace. Both men always remained in contact; on occasions they celebrated their consecutive birthdays on the 26th and 27th May together, whilst they often exchanged letters and gifts in the interim, with Lee commenting on the “entertaining letters and satirical verses” which he received from him. Yet however much he took pleasure in his friendships, Cushing was always honest about his state of mind following Helen’s demise. “She was my whole life and without her there is no meaning. I am simply killing time, so to speak, until that wonderful day when we are together again.”

And so he waited, and he worked, to fill the time. As another irony of both Cushing’s and Lee’s respective careers, neither of them were fans of the horror genre. Cushing, whilst always characteristically charmed and humbled by the letters he received regarding his horror roles was far more glad of the opportunities which genre film afforded him than he ever was a fan of the end product. In a 1985 interview, he said, “It gives me the most wonderful feeling. These dear people love me so much and want to see me. The astonishing thing is that when I made the “Frankenstein” and “Dracula” movies almost 30 years ago the young audiences who see me now weren’t even born yet. A new generation has grown up with my films. And the original audiences are still able to see me in new pictures. So, as long as these films are made I will have a life in this business – for which I’m eternally grateful.”

As the friends’ careers diverged somewhat, Cushing was to continue working as he battled prostate cancer; it was the illness which was eventually to end his life in 1994 when he was eighty-one years old, after a ten-year battle. Christopher Lee recounts of their last meeting in that year, “There was something a little bit different about Peter, waiting for the end: for twenty-three years since his beloved wife Helen died, his friends realised that he wouldn’t mind packing up on this earth to join her. Vincent [Price] once, in a phone call to me, asked, ‘Is he still expecting Helen to be there to greet him?’ And I said, ‘Looking forward to it.’ And Vincent said, ‘And what if she’s out?’ I said, ‘I shall tell him you said that, Vincent,’ and when I did, Peter laughed fit to dispatch him immediately on his journey. When he’d recovered he said, ‘Only Vincent could say such a thing, and only you could pass it on.’” – Source