About the hit in NYC.

They wanted to make sure they got it exactly right.

There was an anniversary recently to do with very well known book that is often used in whole or in excerpts in high schools. Maybe one day there will be a serious discussion of who actually wrote this book. A very small part of it actually comes from the author known by the public who was very young when she was supposedly writing it. 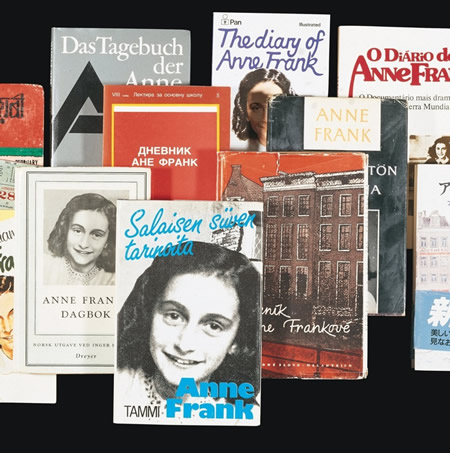 There was an anniversary recently to do with very well known book that is often used in whole or in excerpts in high schools.

A very small part of it actually comes from the author known by the public who was very young when she was supposedly writing it. The vast majority of the book was written by a close family member as well as another writer who later sued the family member and won a financial settlement.

While we are it, let’s look at the family member.

Far from being heroic, he did business with the group he and his family were hiding from selling them, among other things, chemicals that could be used in explosive weapons.

Book: The Diary of Anne Frank

The Anne Frank fraud diary and house: no evidence found

Did Anne Frank write her diary or was it written by her father Otto ?. This question gets asked over and over again.

In 1980, because of a lawsuit in a German court, the German state forensic bureau, the Bundes Kriminal Amt [BKA], forensically examined the original “diary” manuscript. Their analysis determined that “significant” portions of the work were written with a ballpoint pen. Since ballpoint pens were not available before 1951, portions of the work were added well after the war (Anne Frank died in March 1945).

The true author of the diary was Jewish novelist Meyer Levin, who demanded and was awarded $50,000 in payment for his work in a court action against Anne’s father, Otto Frank. – Source

Is The Diary of Anne Frank Genuine? – Robert Faurisson

In order to study the question posed and to find an answer to it, I have carried out the following investigations:

Internal criticism: the very text of the Diary (in Dutch) contains a number of unlikely or inconceivable facts.

A study of the premises in Amsterdam: on the one hand, the physical impossibilities and, on the other hand, the explanations made up by Anne Frank’s father severely compromise him.

A return to Amsterdam for a new investigation: the witnesses turn out to be unfavorable to Mr. Frank; the probable truth.

The “betrayer” and the person who arrested the Franks: why has Mr. Frank wished to assure them such anonymity?

Comparison between the Dutch and German texts: attempting to make too much of it, Mr. Frank has given himself away; he has signed a literary fraud. – Source

Censoring Anne Frank: how her famous diary has been edited through history

Anne Frank’s diary was first published in 1947, two years after her death, and her words are now immortalised as a symbol of the victims of the Holocaust. But was it the story that Anne intended for us to read? Ahead of the 75th anniversary of Frank’s death, Erin Blakemore considers how her diary has been edited and appropriated through history – including by her own father – and how previously hidden pages lead us to a very different picture of the real teenage girl…

Otto Frank sifted through the documents – a chequered autograph book, an exercise book, a sheaf of loose papers. Their author, 15-year-old Anne Frank, had died of typhus in a German concentration camp a few months earlier, in spring 1945. Now Otto, her father, was reading words he had never imagined his daughter could write. As he read, he came to an unnerving conclusion: he had never really known her.

“I knew that Anne wrote a diary,” he said in a later interview. “But I must say I was very much surprised about the deep thoughts Anne had. It was quite a different Anne than I had known as my daughter. My conclusion is… that most parents don’t know, really, their children.”

Burdened with the responsibility of stewardship for his daughter’s words, Otto Frank would spend the rest of his life overseeing the publication and dissemination of Anne Frank’s diary. Along the way, though, his editorial decisions would inadvertently cover up the unsuspected depths he had discovered inside.

By the time the Frank family was arrested by the Gestapo in 1944, they had been in hiding in Amsterdam for two years. Anne and her sister, Margot, and their parents, Edith and Otto Frank, sought refuge on Prinsengracht 263 with Hermann van Pels, a business associate of Otto’s, along with his wife, Auguste, and their son, Peter. Fritz Pfeffer, a family friend, completed the group.

Their hiding place was the back portion of the building where Otto’s business still ran. Only a small group of Otto’s colleagues had any idea the building was also a sanctuary. The cadre of devoted workers risked their lives to provide Otto and his family with food and moral support.

On 4 August 1944, their luck ran out. Though the identity of their betrayer has never been discovered, someone reported their existence to the Gestapo. During their arrest, the police ransacked their living quarters, taking everything of value. But they left behind a treasure, strewn in pieces along the floor: Anne’s diary.

Miep Gies and Bep Voskuijl, two of Otto’s employees, gathered up the papers and stored them in a locked drawer. They planned to give them to Anne when she returned.

She never did. Less than a year later, the 15-year-old died of typhus at Bergen-Belsen concentration camp. Otto was the only survivor of the eight who had been in hiding. After Otto received news of his daughter’s death, Gies gave him the diary. Initially refusing to read them, he finally dove in.

Did Anne’s father edit her diary?

He couldn’t stop reading. Anne’s words were a revelation to Otto. He began sharing translated portions of the diary with his mother, then telling others. Eventually, persuaded by a historian and a friend who convinced him the diary was a significant document, he agreed to seek publication.

But the manuscript that Otto Frank pitched to Dutch editors didn’t contain his daughter’s entire diary. Anne herself had begun editing large swathes of her diary with publication in mind after hearing a radio broadcast that called on Dutch people to preserve diaries and other war documents. Otto respected some of those editorial decisions, but overlooked others ­– for example, he included material about Anne’s crush on annexe dweller Peter van Pels.

Otto made his own cuts, too: he removed passages in which Anne was critical of her parents’ marriage, and expurgated sections about sexuality and her often brutal comments about friends, family members and acquaintances. In an early passage from the diary that Otto eliminated completely from the first editions, Anne describes her classmates as everything from “a detestable, sneaky, stuck-up, two-faced gossip” to “pretty boring.” – Source