Hopefully it will not end in some mass overdose.

This B list actress is the one providing all the party favors to the rapper and friends.

Hopefully it will not end in some mass overdose.

Apparently when she is in NYC, she uses/used the same drug dealer that wiped out the comics. 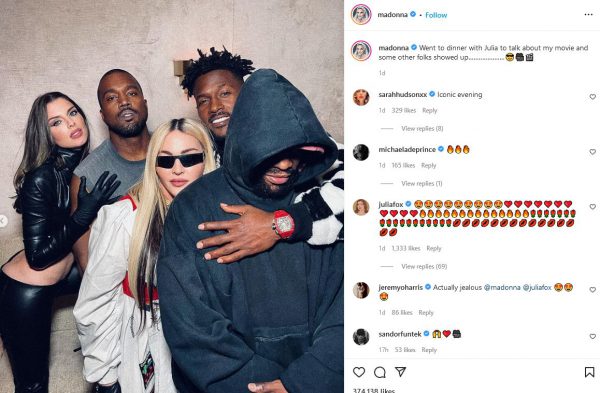 Madonna teased that Julia Fox may be the leading lady in her biopic after grabbing dinner with the actress and her new beau, Kanye West.

“Went to dinner with Julia to talk about my movie and some other folks showed up…………………😎🎥🎬,” the Queen of Pop, 63, captioned a series of photos with Fox, 31, West, 44, Floyd Mayweather and Antonio Brown on Instagram Thursday.

Fox also posted a picture from their shoot and captioned it, “MOTHER @madonna.”

The new group of friends enjoyed dinner at the popular Los Angeles restaurant Delilah on Wednesday.

Madonna and Fox seemed to be very comfortable as they sprawled out on a couch and had their hands all over each other in the photos. – Source

Officer Mike Lopez, a spokesman for the Los Angeles Police Department, said there “was no indication of foul play.” When officers arrived at the scene in the 200 block of Carroll Canal, they found three people dead and one woman who was taken to a hospital.

Johnson was a stand-up comedian and a writer on the TV program “Comedy Parlour Live.” – Source