It wasn’t just the s.t.r.i.p.p.e.r.s. and the cheating that made the wife of this A list mostly movie actor want to leave him.

It is also due to some of the actions he has taken outside of their marriage that she thinks could end up killing them both.

Jason Momoa, 42, and wife Lisa Bonet, 54, SPLIT after 16 years together and just over four years of marriage: ‘We free each other to be who we are learning to become’

Momoa, 42, and Bonet, 54, announced their split Wednesday in a joint statement

Their statement read: ‘We have all felt the squeeze and changes of these transformational times… A revolution is unfolding and our family is of no exception… feeling and growing from the seismic shifts occurring.

‘And so we share our Family news that we are parting ways in marriage.’

The couple explained in their statement that they weren’t announcing their separation ‘because we think it’s newsworthy, but so that as we go about our lives we may do so with dignity and honesty.’ – Source 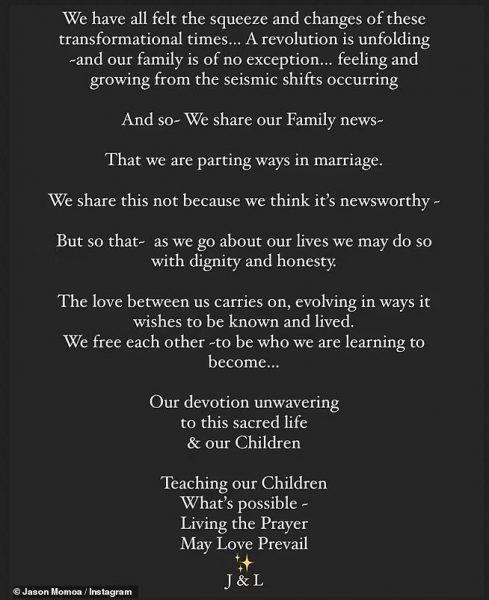