He left the show to save his marriage because of all the cheating.

The blinds through the years are littered with the mistresses of this A list singer from an A list group who also used to be a reality judge.

He left the show to save his marriage because of all the cheating.

He kept on cheating anyway.

There are dozens of women left by the wayside.

When I see a woman come forward and say something like she had no idea the singer is married, are we supposed to pretend there is no such thing as Google?

She just wants to look like a victim and to get clicks for her TikTok.

We already know he is trash, and she should have too. 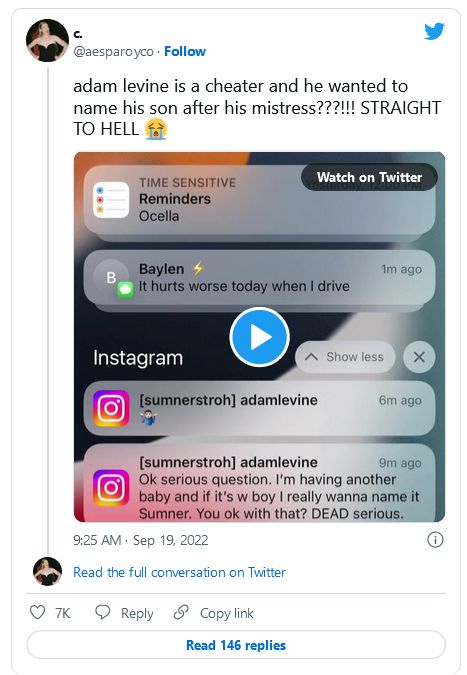 Adam Levine Allegedly Cheated on His Wife, Tried to Name Their Baby After His Mistress

What a day to be Maroon 5 frontman Adam Levine’s social media person and have to explain to the 43-year-old what TikTok is!

On Monday morning—just three days after Levine’s model wife Behati Prinsloo confirmed their third pregnancy with a photo of her growing bump—Instagram model Sumner Stroh dropped a bombshell TikTok in which Stroh alleges Levine “manipulated” her into having an affair. Stroh said that back in June, after months of not talking, Levine DMed her on Instagram asking if Stroh is “ok with” him and his wife naming their forthcoming baby after her. Messy!

The full DM read: “Ok serious question. I’m having another baby and if it’s w [sic] boy I really wanna name it Sumner. You ok with that? DEAD serious.” He followed up the message with a shrugging emoji (odd!):

In her TikTok, Stroh recalls “having an affair with a man who’s married to Victoria’s Secret model.” When the affair began, she said, “I was young, I was naive. And I mean, quite frankly, I feel exploited. I wasn’t in the scene like I am now. So I was definitely very easily manipulated.”

“Maroon 5 is practically elevator music at this point,” Stroh continued. (Elevator music!!!) “So, I’m sure you know who Adam Levine is. Adam and I were seeing each other for about a year, after I stopped talking to him over a period of months, this is how he came back into my life.” As for why Stroh decided to share her story now, she explains at the end of the video that she’d “sent some screenshots recklessly to a few friends I thought I trusted, and one of them had attempted to sell to a tabloid—so here I am.” – Source