He has also been cheating on her with another actress

Lost in the inevitable split between this former A-/B+ list actress and her husband is that he has also been cheating on her with another actress who is over a decade younger and higher on the list.

Why Rumors Are Swirling About Emilia Clarke And Jason Momoa

After Jason Momoa and Lisa Bonet announced their divorce, the internet began buzzing over the idea that Momoa might be involved with one of his past “Game of Thrones” co-stars. According to MeAww, fans are putting the pieces together that they believe point to a blooming romance between Momoa and Emilia Clarke.

The pair reached peak fame when playing their respective roles of Khal Drogo and Daenerys Targaryen on the hit HBO show. They were husband and wife on-screen, but could the actors be more than just friends following the end of the show and Momoa’s divorce?

Fans have done some digging and found a photo that Momoa posted of himself and Clarke on Instagram in August 2021 with a sentimental caption (via Tyla). In the photo, Clarke is sitting on Momoa’s lap, and the two are grinning widely for the camera.

“MOON OF MY LIFE,” the caption read. “you are wonderful love u forever @emilia_clarke.” (“Moon of my life” is what Khal Drogo called Daenerys on the show.) In the comments, fans were, of course, sounding off. One wrote, “Friends in love. I hope you follow ur heart,” while another said, “Omg u guys are like perfect!”

Fans also found an interview Momoa did on “The Graham Norton Show” in 2019, where he said he makes an effort to visit Clarke every time he’s in the United Kingdom. – Source 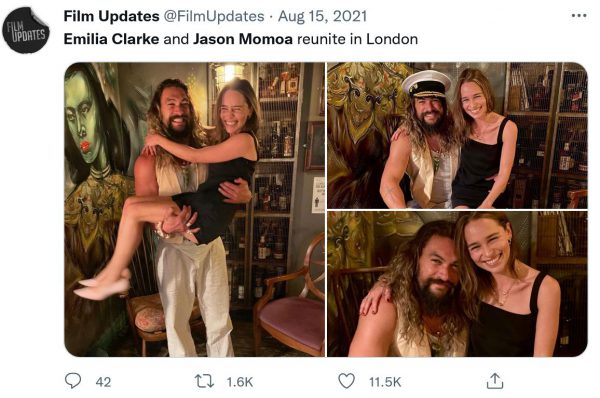 Emilia Clarke and Jason Momoa’s friendship throughout the years is just so pure pic.twitter.com/KvKj4bg4xI

— what greater revenge against violence than peace? (@Targ_Nation) August 16, 2021