This permanent A list songwriter is also permanently A list when it comes to ghostwriting, so she knows what she is talking about when weighing in.

Diane Warren Claims She ‘Meant No Disrespect’ to Beyoncé

Monday, Beyoncé’s overrated … but you know what happens on Tuesday. After six hours of backlash, Diane Warren has apologized for an apparent jab at the songwriting credits on Beyoncé’s latest album. “I meant no disrespect to @Beyonce, who I’ve worked with and admire,” she tweeted on August 1. “I’m sorry for the misunderstanding.” Speaking to Rolling Stone, she added that “every collaborator who worked on this record should be celebrated.” Warren initially raised the ire of the Beyhive by asking — with a rolling-eyes emoji — how there could be 24 writers on a song. (Renaissance features plenty of sampling and interpolation; “Alien Superstar” credits 24 people.) Warren claimed that her question wasn’t meant to be shady, though she added in a since-deleted reply, “That’s 23 more than on mine.” No shade? Sure, Diane. 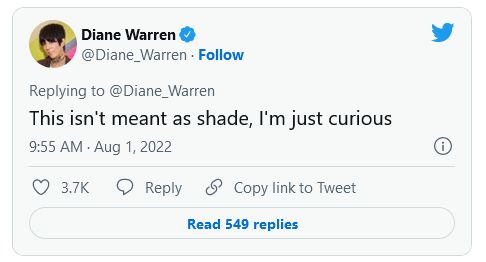 Warren wrote hits like “I Don’t Want to Miss a Thing,” “If I Could Turn Back Time,” and “Because You Loved Me.” The veteran songwriter also penned Beyoncé’s 2011 track “I Was Here.” In case she really did miss the memo during her decades-long career, people took to her replies to explain how sampling works. Major Renaissance collaborator The-Dream even offered some historical context for the practice: “It started because we couldn’t afford certain things starting out, so we started sampling and it became an Artform, a major part of the Black Culture (hip hop) in America,” he wrote. In a separate tweet, he added, “You know I love you, but come on. Stop acting like your records haven’t been sampled.” “I didn’t know this, thank U for making me aware of it,” Warren replied. “No need to be mean about it.” Oh boy. If The-Dream’s response felt mean, we’d suggest that she not look too closely at what the Beyhive is saying about her right now. 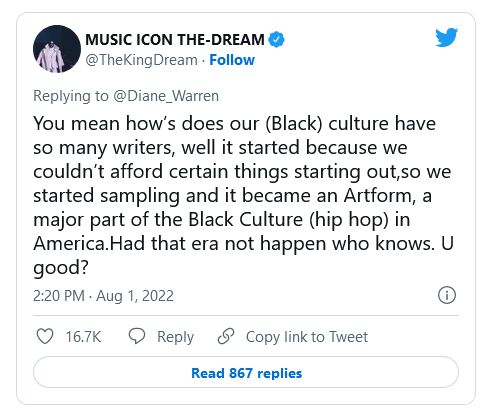 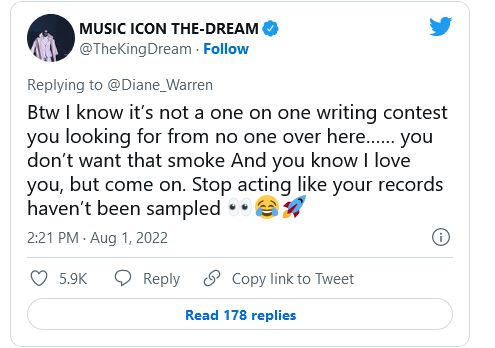